There are about 470,000 words in the Merriam-Webster dictionary. These words come from over 10,000 languages. The English language belongs to the Indo-European family of languages. As you can see in the map (Source: Western Oregon University) below, Indo-European languages are spoken all over the world. Because all of these languages came from one common language, you will see many similarities between words of different origins. You will also see many words in the dictionary that may have come from Sanskrit, then went into Norwegian, then into Old English. 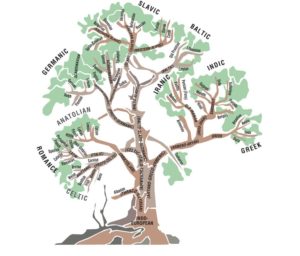 Many of the words that are asked in spelling bees come from this language family. Because the Indo-European language family makes up a high percentage of all the words in the dictionary, it is useful to learn the language patterns for all of these languages. 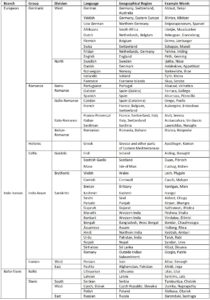 You will also see many words asked at spelling bees that come from languages that aren’t in the Indo-European family such as Austro-Asiatic, Finno-Ugric, Afro-Asiatic, Sino-Tibetan, Dravidian, etc. We will discuss these language families in another post.